Your Order Has Been Placed.

When the design team for Holloway Company of Virginia started designing a two-level hybrid deck/dock and swim platform on a pond for a family in Loudoun County, they considered the lush greenery surrounding it. And with the help of the client, they came up with incorporating leaf-shapes into the design to represent the trees. Built with durable MoistureShield Vision® capped composite decking, the nature-inspired dock showed such a high level of creativity and functionality, the project won first place in the Dock Category in the North American Deck & Railing Association’s (NADRA) Deck+ Competition in 2021. MoistureShield’s composite deck boards are often used for decks in wet environments and marina docks because of its Solid Core manufacturing process, which slowly encapsulates each board’s wood fibers.

According to Holloway Company, headed by owner/president Ted Holloway Tidmore, the homeowners and their two college-age sons wanted to spend leisure time, fishing, swimming and having meals by the pond. According to Holloway’s design team, “We designed and built the two- level, leaf-shaped dock with MoistureShield Vision featuring CoolDeck, a proprietary technology that reduces deck surface temperature by up to 35%.  This was very important because the dock gets direct sun most of the day and imagine that on bare feet!”

Because water levels change based on the weather, any splash overs were a concern, so they relied on MoistureShield’s ability to be submerged and get wet on a regular basis. The designers explained that when they first tried mimicking the pond’s lily pads, due to their strange shape, the drawing ended up looking like Pac-Men, so they decided to go with a traditional leaf to replicate the trees around the pond.  Holloway’s lead designer said, “We let our creativity really go on this one and it turned out to be a head-turning design—it’s very different and organic for a nice blend into the scenery.” The result was a dock/deck with a floating platform that is tethered to the dock, so it can float out into the deeper parts of the pond for swimming.

Holloway’s team of craftsman said the most challenging part of constructing the dock was setting the piers to support the whole structure into the muck and rock. “We used a helix pier auger—which looks like a big screw to get deep into the bottom of the pond. We had to work on a floating barge and the auger would often twist, as the machine drilled into the ground from the make-shift barge.  Because we mostly build decks and this was our first dock, we didn’t have the typical large barge to drill the piers that supports it to keep it from twisting. With a lot of perseverance, we did it.”

The other consideration was this dock had an upper and lower deck with a space between that is open to the water. The homeowner wanted to put in some rocks and decorative driftwood under clear Lexan paneling to serve as a walk-on aquarium over the dock. The two leaf-shaped sections are at different levels, so you step up from one leaf to the next.  The Holloway crew also constructed built-in benches with holes cut in to support patio umbrellas to help shield the intense sun.

Using MoistureShield Vision grooved boards with their universal clip hidden fasteners and a few face fasteners around the perimeter, the Holloway crew made their own plugs with a plug cutter to match the decking. “It was very easy to cut and work with, using jigsaws to cut curves and leaf-shapes,” according to the crew.

Once they jigged the tight curves with the MoistureShield boards, the team bent a darker border made with another material around the outer edges. MoistureShield Vision’s CoolDeck feature and extreme moisture resistance answered two of the homeowner’s biggest concerns because of the all-day sun and the pond’s occasional rise in water.  The client was also planning to adjust his dam because of the vast spring and summer rains in Virginia.  The Holloway team found the dock’s water management really came into play to make it usable full time. The family is able to use the floating portion attached to the main area with a bungee and venture out to deeper water to swim.”

Since the property already had the pond when the homeowners moved in and they always dreamed about maximizing a deck/dock to relax and catch some sun. The Holloway team said they were happy to hear that the family was able to enjoy the dock in full this past summer. Holloway was able to capture the homeowner’s vision to make the design work and really blend in with the woods and pond. Having the right decking material means they get to enjoy it more often.

“It was very easy to cut and work with, using jigsaws to cut curves and leaf-shapes.” 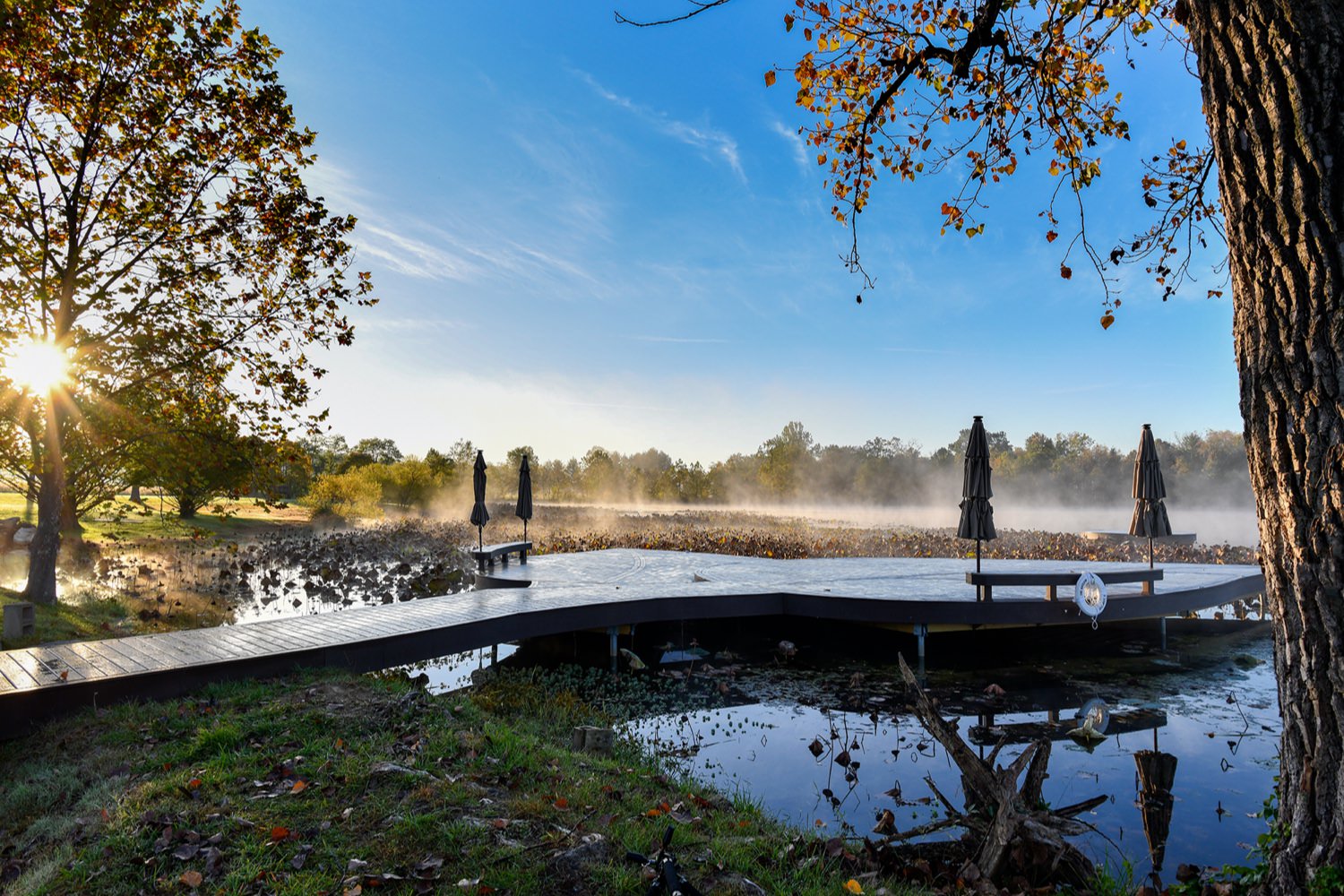 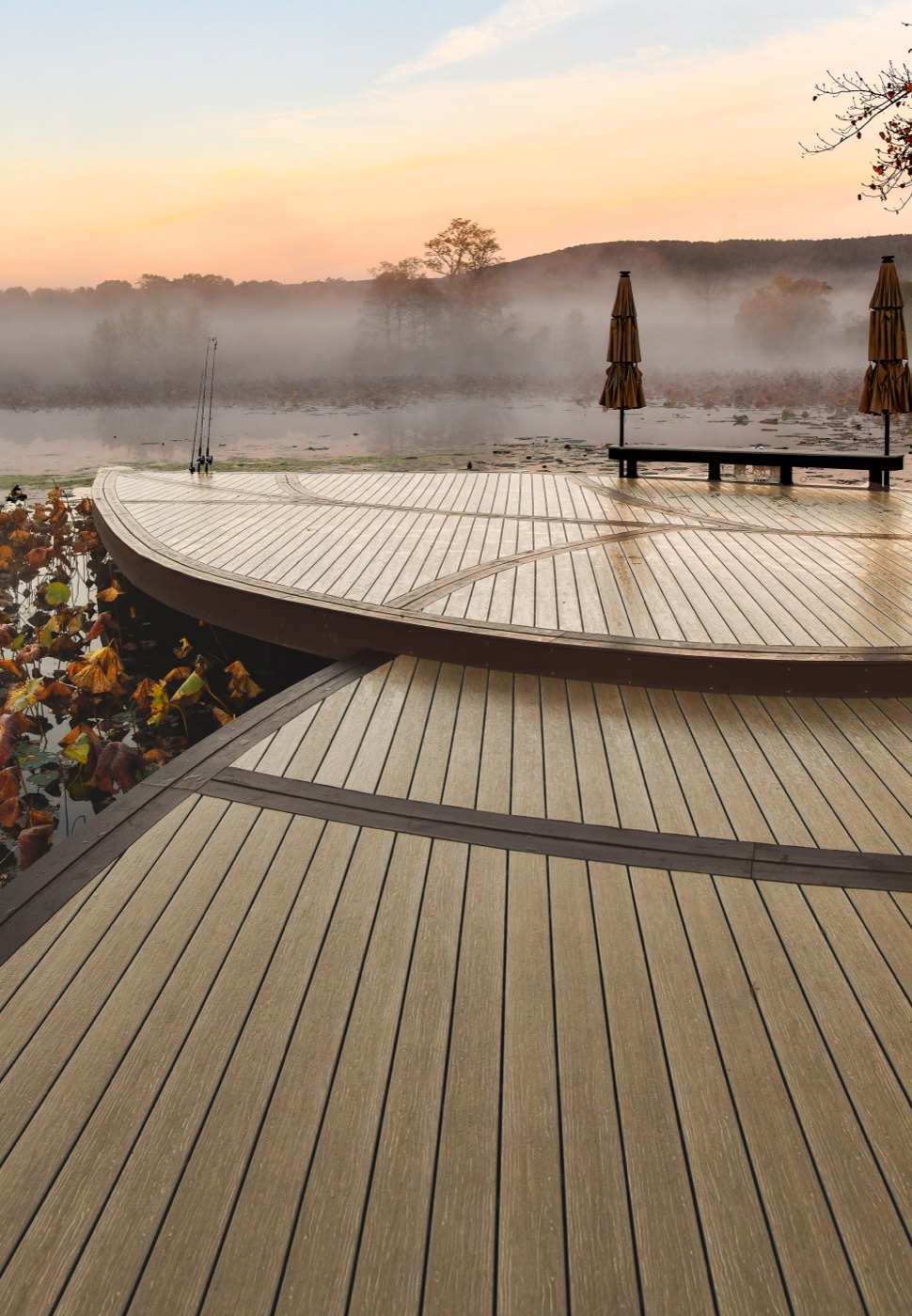 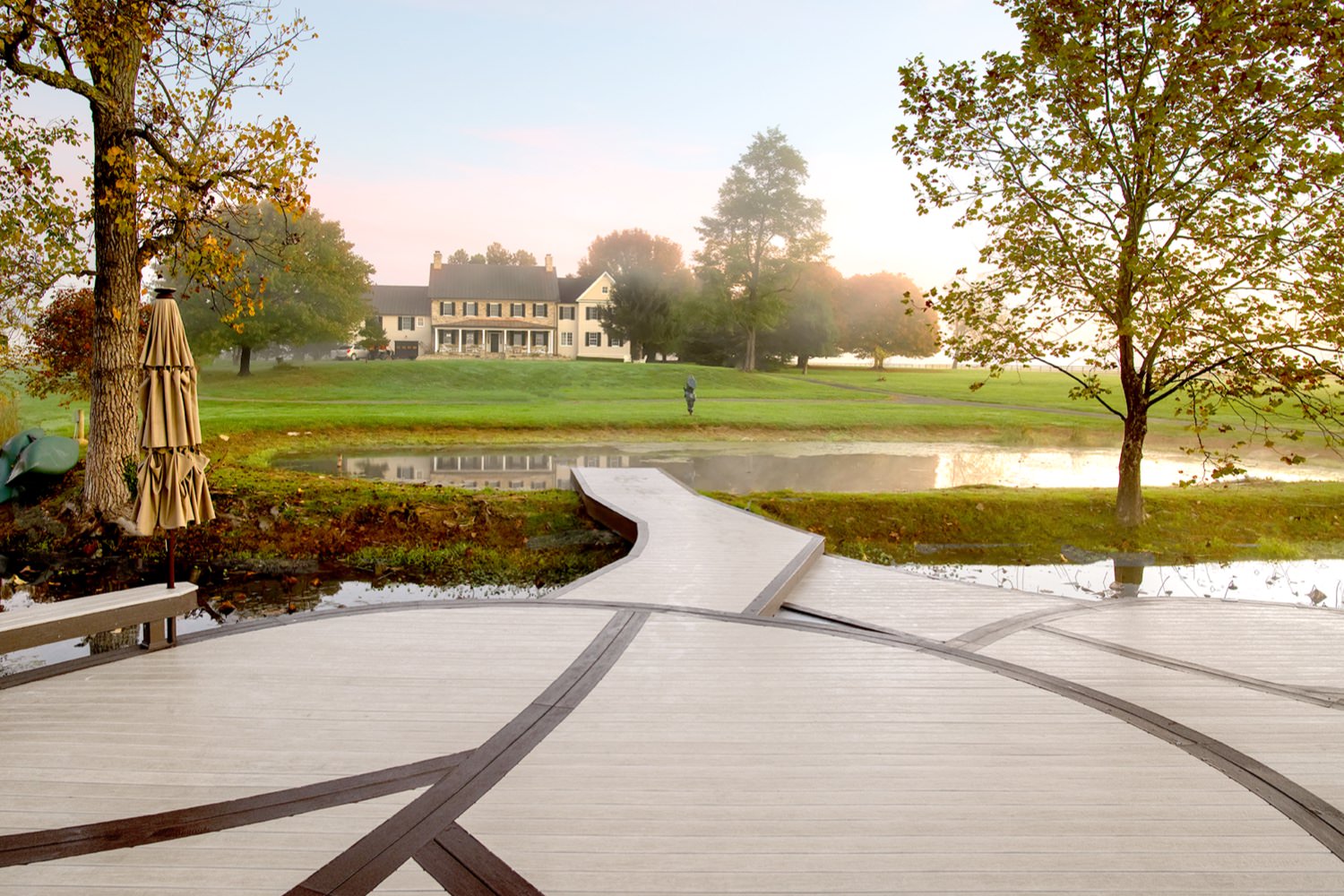 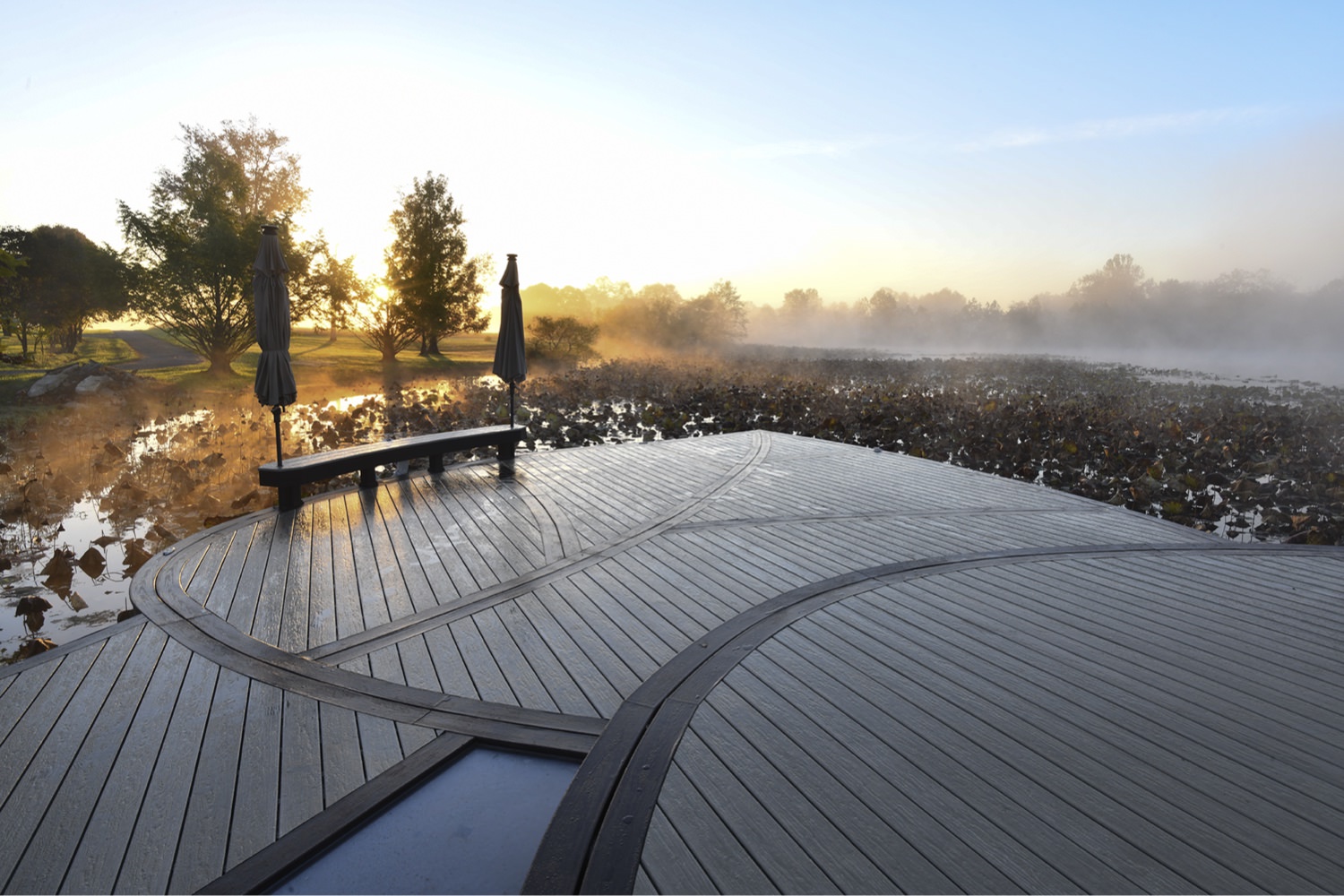 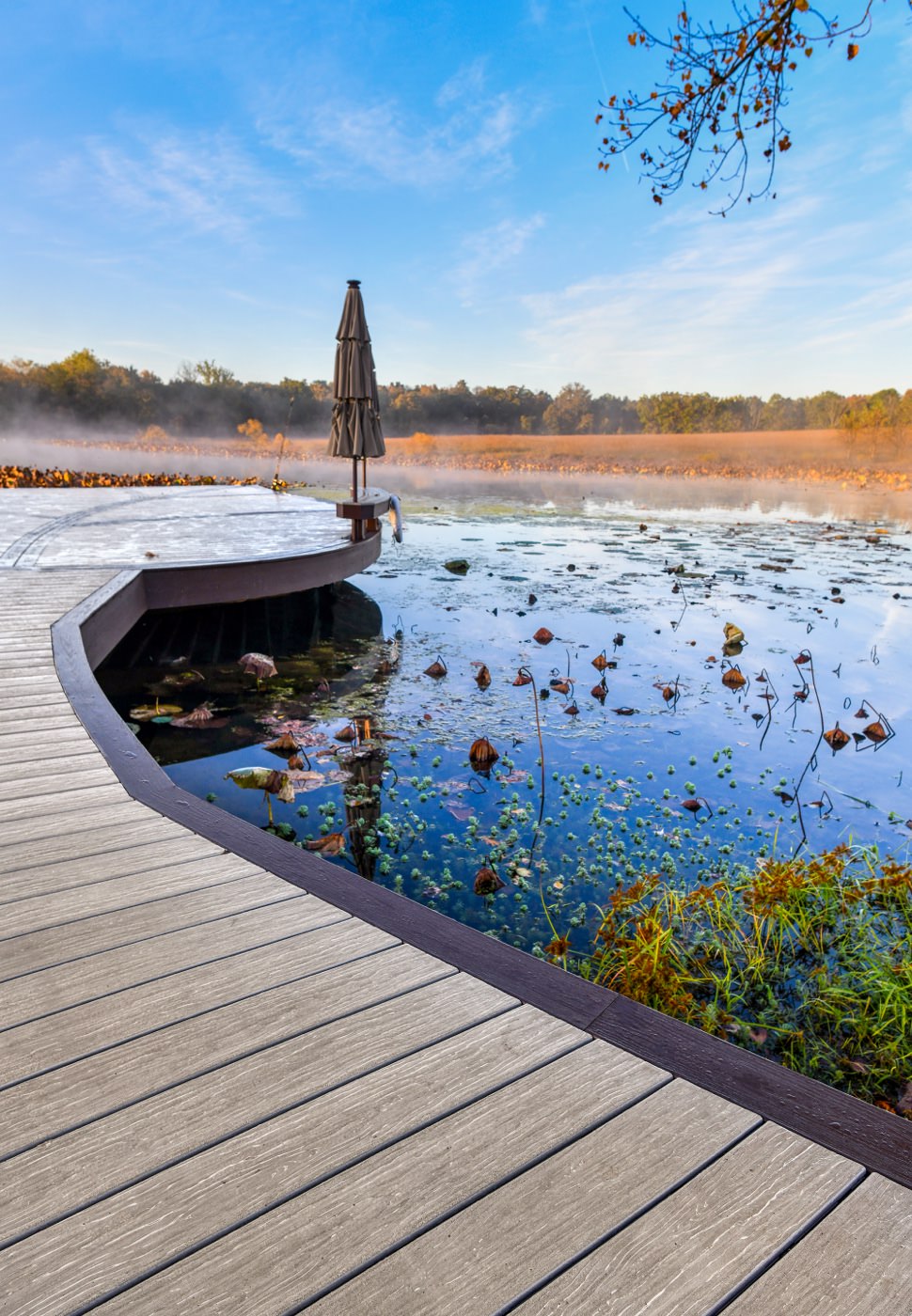 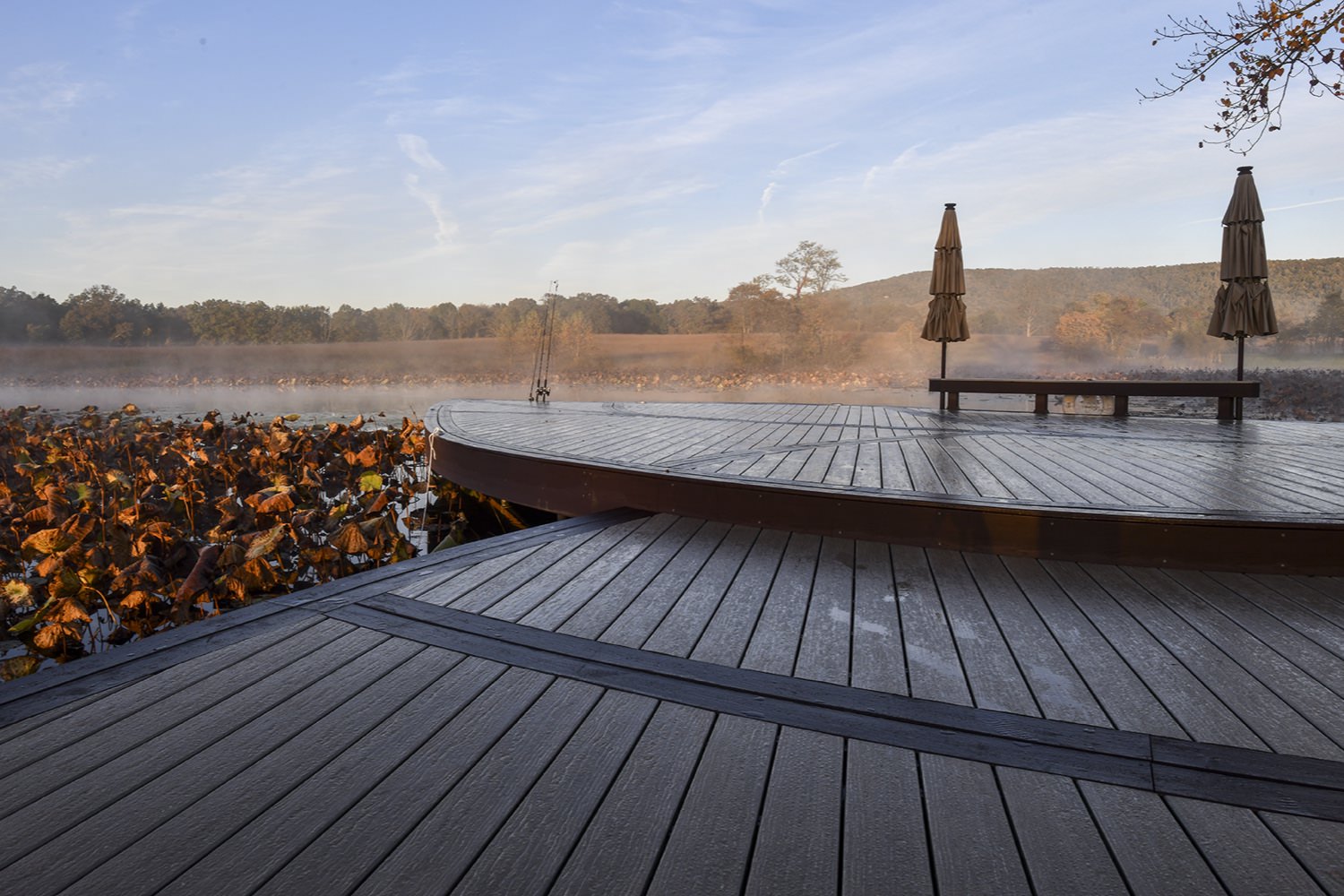